Towards the end of the 17th century the court of the tenth Guru had risen in magnificence and splendour and matched the courts of the Imperial Mughal emperor in Delhi and the various regional courts of Golconda, Bijapur, Ahmednagar and the Rajput principalities.

From an early age, the young Guru Gobind Rai had mastered Gurmukhi, Braj Basha, Sanskrit, Persian and Arabic as well as having undergone a thorough education in Sanskrit and Islamic literature. As an extension of his early education the Guru was furthermore trained in the royal and courtly practices of the time. Already in his childhood the Guru was seen amongst his contemporaries to conduct himself as a pious mystic and a brave warrior king.

In the course of a few years, the Guru had assembled a wide range of poets, scholars, musicians, mystics, warriors and philanthropists from all over India, transcending various ethnicities and religious backgrounds. From the holy land of Paonta, Anandpur and later the Lakhi Jungle, poet-scholars would engage in the pious work of composing poetry and translate the ancient Sanskrit literature of India as well as the classics of the Islamic world. The purpose for this noble work was to make the literature and heritage of the ancient Indian civilisation and culture accessible to the common people by translating them into a language they understood. Amongst the various works that were composed or translated were the Upanishads, Bhagavad Gita, Mahabharat, Ramayana, Kimiya-ye saʿadah, Diwân-e-Kabîr and Mathnavi. Apart from works of mythological and spiritual nature, literature of political theory, prosody and rhetoric, tales of love and human psychology were furthermore translated into the vernacular for the benefit of the masses that had been deprived of this literature for so many centuries. In the court of Guru Gobind Singh the poets were able to find a liberal patron who supported their talent and creativity, and rewarded them with great spiritual and material wealth. The poet Sukhdev narrates his journey to the tenth Guru’s court towards the end of his work on Braj Basha linguistics:

As the science of prosody was spreading throughout Northern India, I came to the Punjab country and entered the court of Guru Gobind. Here I read and was captivated by poetry. I arrived during the year 1744 according to the calendar of Rai Bikram (1687 CE). Sukhdev diligently reflected on his task and was greatly rewarded by the Guru.

Though much of the poetry composed in the darbar of Guru Gobind Singh had a militant flavour, poetry of love and mysticism also had a prominent role in the court reflecting the concept of the saint soldier. Amongst some of these are the works of poets from Bihar who resided in the Lakhi Jungle Darbar who wrote the following: “The Guru is Gobind. When I [close my eyes] and look deep within [my heart], I no longer see myself but perceive you alone”. 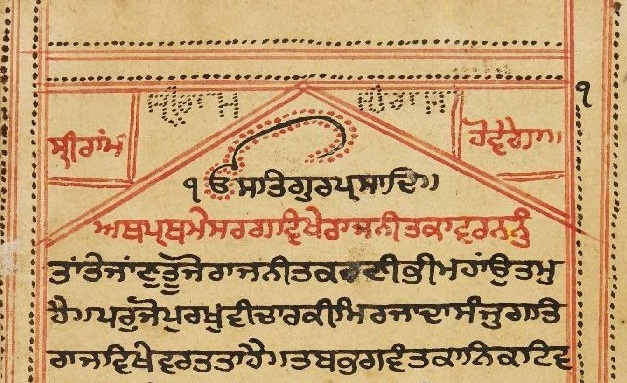 A Sant Basha translation of the world famous philosophical treatise Kimiya-ye saʿadah (The Alchemy of Happiness)  written by the 12th century Islamic philosopher Muhammad Al Ghazali in Bagdad, Iraq. Some traditions hold that it was translated  in Anandpur by Muhammad Badr Ud Deen (popularly known as Pir Budhu Shah) at the instance and patronage of Guru Gobind Singh.

It was in this majestic and mystic court that Bhai Nand Lal took residence. Such was the patronage of Guru Gobind Singh that he would often shower his poets with rewards and host major parades in their honour in a way that was not even bestowed upon the warriors in the court. The early 19th century Sikh historian Kavi Santokh Singh in his voluminous Suraj Parkash writes of the honour that was given to the poets in major parades which encompassed royal symbolism such as kettle drums, jewellery and elephants.

The thunder of drums and the boom of the kettle drums are believed to be the thundering of clouds. The symbols of the court shine so radiantly that the sun has gone and hidden itself in shame. There are herds of elephants numbering in the thousands. The sight is of a dazzling body studded with precious jewels. Listening to the tumult of hooves as enemies prepare and exert themselves, gods like Indra and great kings are both ashamed of their fear in such a crisis. Hans Ram says to you who are running away scared, “be seated [and do not be afraid]” as this is the procession of royal poets (kavirâj) requested by Gobind Singh.

The Guru’s court did not, however, only consist of poets. Musical kirtan training in the ancient raag meter was practiced and taught by the descendants of Bhai Mardana, while the warriors were engaged in learning the art of war and chivalry. Scribes were copying beautifully illuminated manuscripts of the Guru Granth Sahib while devoted Sikhs from all over India travelled to the court of the Guru to have their own scribed copies of the Guru Granth Sahib signed and approved by the tenth master. Many of these manuscript saroops still exist till this day having the signature of the tenth master.

The output of the scholarly activities in the court were compiled into the Vidiya Sagar Granth [the book of the ocean of knowledge], a manuscript that weighed more than 320 kilos when it was unfortunately lost in the Sirsa river during the evacuation of Anandpur in late 1704. If you wish to read short articles on some of the poets and the writings they produced click here.

In this court, amongst the 52 poets, scholars and musicians, Bhai Nand Lal stood out and rose to become the most magnificent and outstanding Persian poet. It was in this court that he so impressed his Guru and Master with his personality and numerous Persian and Arabic writings that he was referred to as the Guru’s jewel and hugged in embrace.